Kente: A Meaningful Tradition in Cloth 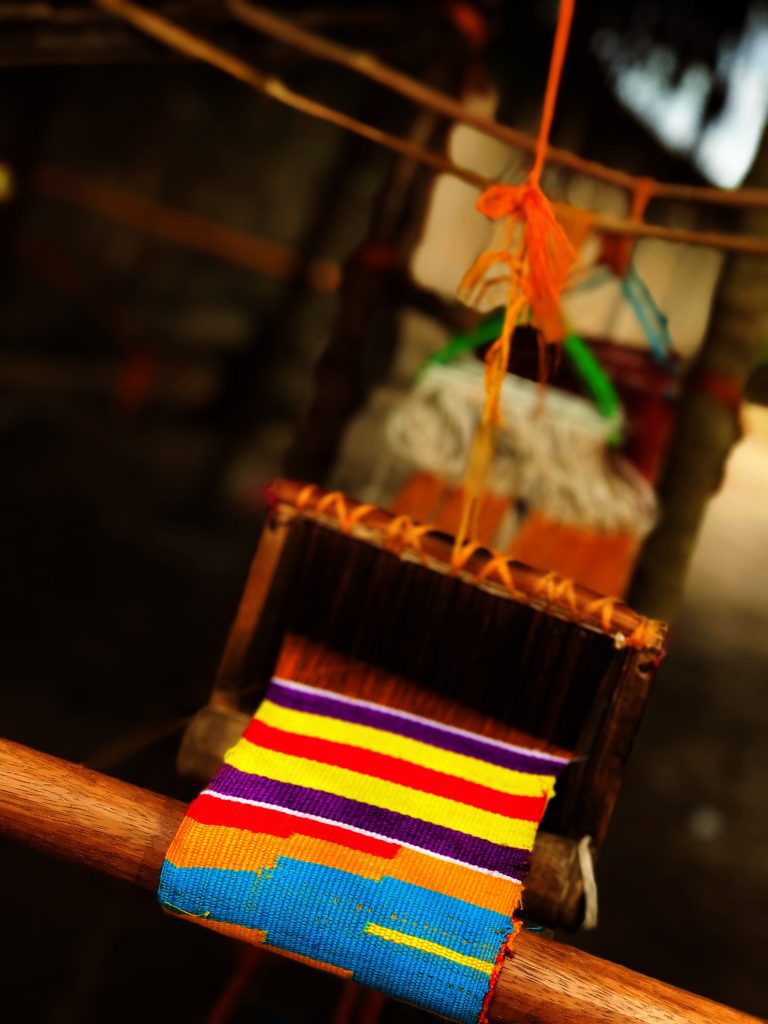 Dazzling, colorful textiles from West Africa have inspired fashions popular among Americans of African descent. Although many African have long woven fabrics in diverse styles, clearly “Kente”- handwoven cloth made in long, narrow strips, then cut and sewn together—is the best known and most influential.

Made by the Asante people of Ghana and Togo, Kente is not the traditional name for this cloth in the language of either ethnic group, although it is now commonly used by all Ghanaians and Togolese, as well as other Africans. Kente is a word of unclear origins, but is perhaps a corruption of the Fante word for “basket”, also a product that is woven. The Fante are southern neighbors of the Asante and were, for a long time, the middlemen in trading Kente to non-Africans.

The origins and early history of West African weaving are obscure. Blue and white strip cloth, not very different from Kente, may well have been produced in sub-Saharan African by the 11th century A.D. This is the radiocarbon date assigned to narrow-band fabrics found in dry caves in the land-locked modern nation of Mali; in the region know as the Western Sudan. It is not unlikely that narrow-band weaving technology entered the central zone of West Africa—north of where Kente is now woven—by the 15thcentury.

Shortly after Europeans arrived on the West Coast of African in the late 15th century, in the region that came to be called the Gold Coast—now Ghana—they noticed fine, locally woven cloth.

Cloth trade between Europe and Africa was once one-way, to Africa. Europeans textiles were coveted imports from the earliest days of contact. Some imported fabrics were worn or otherwise used “as it”. But many cotton, linen and especially fine silks cloths made in Europe were laboriously unraveled, then rewoven into textiles that more accurately expressed local African artistic preferences, which were clearly well established prior to the early contact period.

Over the several centuries that weavers have been developing and refining Kente cloth, hundreds—perhaps thousands—of types and patterns have been created. And all Kente cloth types, as well as all specific designs used on different cloth have distinct names.

Many of these names are proverbs or refer to proverbs. An abstract cross, interpreted as a body design pattern, for example, refers to the proverb that translates as “Every man carries his own mark”; that is, everyone has a distinct personality. A pattern was introduced in 1960, to commemorate the newly opened hydroelectric dam at Akosombo. As it enabled the electrification of much of Ghana, the new dam was an important contribution to national life. Anthropologist Robert Rattray recorded over 300 pattern-associated proverbs in the 1920s.

Traditionally, only men produce Kente cloth’s narrow band weaves, which are 3 ½ to 4 ¾ inches wide. The men work, seated at horizontal treadle looms, with long warp threads rolled up in front and weighted to provide tension. This type of loom is known in many parts of Africa. Now, it is not uncommon to find women weaving Kente in Ghana.

Until British colonial power became ascendant around 1900, military and political power, as well as wealth and the control of trade, were concentrated in the hands of the Akan royals, among whom the Asante are currently the largest and best known. In pre-colonial times, sumptuary laws governed the use of textiles; persons of lesser rank were forbidden to wear more elaborate, richer cloth than those worn by chiefs. It has been reported that lesser chiefs, who happened to wear more elegant or finer cloths than their superiors, were admonished to change into more subdued apparel. The emphasis on complex royal weaves, which are admittedly the most eye-catching and spectacular, should not overshadow the importance of simple, striped cotton fabrics. Just as the ordinary citizenry among the Asante greatly outnumber royalty, so too, were there always many more common, though often very beautiful, Kente cloths woven and worn in Ghana and Togo.

If the broadcasting of status and rank has long been one specific function of textiles arts in Ghana and Togo, it is far from its only role. For the Ewes, who have not traditionally shared a hierarchical sociopolitical structure with the Asante and other Akan people, the richness and complexity of fabric have been primary indicators of wealth and prestige. When an Ewe could pay for the finest cloth, he or she could then wear it. Certain Ewe cloths were given to bribes, others were worn by mourners, while yet another type celebrated the birth of twins. These specific uses are rarely, if ever, observed today. Asante and Ewe weavers produced many of the same types of textiles. The most characteristic Ewe cloth has small representational inlays—a comb, bird, person, stool, lizard—a type of cloth that the Asante never weave.

The subject of strip-woven textiles called Kente is complex. It is not enough to say that they provide splendid garments, or to say that their cloths embody a refined aesthetic sensibility and a remarkable technical achievement. For the fabrics also encode and express—or once did—sociopolitical values and cultural meanings that add up to no less than a philosophical system and world view. The names of cloths and patterns, the situation and role-specific wearing of cloth, the styles and protocol of fabric display, and finally, the interactions with strangers, all of which are embedded in the history of Kente, bespeak an exceptionally rich, meaning tradition.

It is this last point—interaction with strangers—to which we return in considering the contemporary use of Kente and its industrially produced spin-offs. The interaction began around 1500 when European fabrics were unraveled by African craftspeople to be rewoven into styles more suitable to their values. It continues today when Kente is adopted to new situations in America.

Americans of African descent are showing pride in their heritage by working with and wearing Kente or Kente inspired fabric. Kente is worn during college graduation, all the major Black Greek organizations have color specific Kente stoles and almost every African-American social organization has their own kente stole.

Delivered right to your inbox!